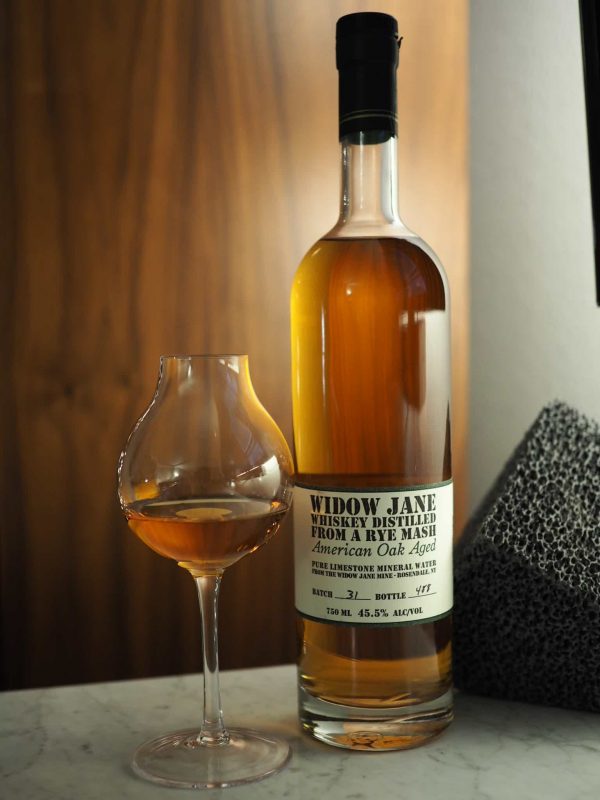 Widow Jane American Oak Aged whiskey is distilled from a rye mash. They don't disclose the whole mash but it is known that the mash is made from rye and a touch of barley. I didn't have a lot of luck with young rye whiskies this year but after tasting Widow Jane's signature bourbon, I wanted to give it a taste.

Thanks to Widow Jane for sending me a few bottles of their whiskies so I can review them. Aside from this bourbon, I also reviewed:

Widow Jane Distillery is situated in Brooklyn, NY and they make sure that there is some NY influence in the whiskey. The whiskey is a minimum two-year-old spirit that has been aged in the barrels they used for their bourbon with the additional freshly cut oak staves. Widow Jane is using limestone mineral water from Rosendale Mines of New York, 100 miles from the distillery as their signature style for their whiskies. This one is bottled at 45.5% abv like their bourbon and a significantly lighter in color like their Oak & Apple Wood Aged bottle.

After tasting the Oak & Apple Aged, I was again expecting a huge distillate profile, but this one feels more refined on the nose with orange, caramel, black tea, lavender and cardamom. It is somewhat really unique. The palate has the deep sweetness of caramelized sugar with some char, nutmeg, rye spices and cinnamon bark with a creamy texture. The finish is very long and carries the same sweetness as the bourbon and Apple Wood aged. Some cinnamon, tangerine and green apples appear at the back.

Despite the intense sweetness, I actually liked this bottle! It is young, but the oak extraction looks like worked pretty well for the distillery. It is not multidimensional but can offer depth in a wide variety of cocktails. I believe even a big piece of ice with cherries can make it a crazy alternative for any cocktails. I liked the nose particularly with the fresh flowers, black tea notes and the overall balance.