First we saw it on TV, then noticed the golden liquid in daddy’s cabinet with crystal friends. Curiosity killed the cat. Probably most of us tried it way before we were ready and put a distance to it. Yes! I am definitely talking about whisky. The spirit which you most probably met with some blend expressions if we are at similar ages.

Whisky has a distinct character in means of social rank. It has always been the sign of being rich, charismatic and powerful which are the things we encountered on TV and movies until now. This article will talk about what is whisky and what are the general types of whisky in simple means.

The word whisky comes from Gaelic word “Uisge Beatha” which means “Water Of Life”. This word evolved into whisky until today. Irish who claimed their spirit is better than the Scottish one renamed it as “Whiskey” and took this word with them to the USA. Canadians used the word “Whisky” and created a relationship with the USA just like the one between Scottish and Irish men. Generally, Scotch, Japanese, Taiwanese, Indian and Australian whiskies are named as “whisky” where as “whiskey” states American and Irish whiskies. Anyway, they are all marvelous!

Written documents tell that whisky history starts in early 1500’s on a purchase order for the funeral of a priest, John Corr. Order of 508 kilograms of barley for whisky is the first written evidence. However, it is believed that the production took place long before it between the families in Ireland.

Whısky?
Whiskies produced in Scotland, Canada, Japan, Australia, India, Belgium and France uses the word “Whisky”. It is noted that American distilleries which are producing single malt whiskies also started to use this word.
Whıskey?
In the USA and Ireland, you may encounter the word “whiskey”.Also some bourbons also carry “whisky” on some of their bottlings as well as “whiskey”.

Why Do We Call It “Scotch” Whısky?

A spirit can be named as Scotch whisky if it is distilled, aged and bottled in  Scotland. Another thing is the raw materials that are to be used. Scotch whisky can only be made with water, grains and yeast which are distilled in copper stills and aged a minimum period of 3 years in oak casks lower than 700 litre volume. The final alcohol to be volumed should be at least 40%.

Whisky produced using 100% malted barley from a single distillery in Scotland can be called a “Single Malt Scotch Whisky”. We can talk about 6 different whisky regions in Scotland which have whiskies in different characteristics.

Malt whiskies produced in different distilleries get together to form blended malt whiskies. Monkey Shoulder, Johnnie Walker Green Label and Island Green and Chivas Ultis are the most renown blended malts in the market. 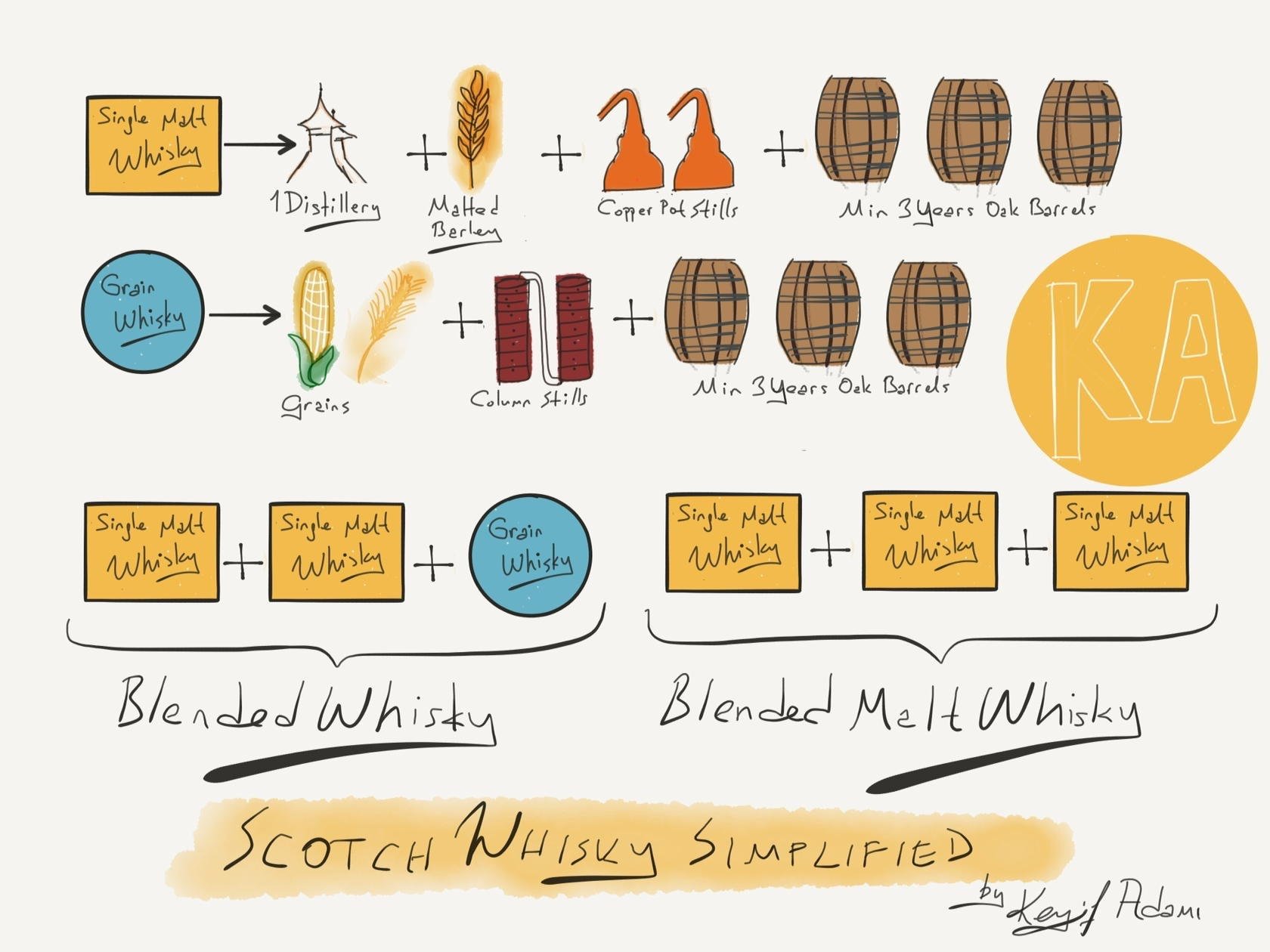 When American whiskeys are mentioned Jack Daniel’s and Jim Beam are the first brands to come in mind.  They both are American of course, but they are different in type. Bourbons are the most popular type of whiskey in the US. Tennessee and rye whiskies are the main other types. There are also grain and malt whiskies  in the USA.

Tennessee whiskey is mixed with bourbon time to time.  Firstly, Tennessee whiskey should be distilled, aged and bottled in Tennessee. After distillation it has to be filtered drop by drop with charcoal in a large tank, which is also known as Lincoln County Process.

Rules for rye whiskeys in the US are similar with the rules for bourbons. The main difference is the raw material to be used. Rye should be used by 51% during the production. Also, it can be called “Straight Rye Whiskey” if the necessary conditions are met as in the conditions stated in “Straight Bourbon” topic.

Canada is the main origin for rye whiskies. However the rye mash can be lower in amount and the conditions for barrels are not that strict. The most important rule is, the maturation should be done at least for 3 years.

Irish whiskey lost its popularity due to numerous crisis, World Wars 1 & 2, and most importantly Prohibition time in the US which was the main client of the Irish whiskey market by that time.

Recently Irish whisky market is living a great moment since a huge investment can be observed towardsit. Quality is uprising. Jameson, Tullamore DEW, Teeling, Tyrconnell and Redbreast are great examples for Irish whiskeys.

Magic or hype? Nowadays everybody is rising an eyebrow when Japanese whisky is in the conversation.  However, they have been distilling whisky since 1920s. Awards, advertisements in the last years made us to notice the beauty of the Japanese whiskies.

They import the peat and a great amount of barley from Scotland. They also import the barrels. However, they started to use Mizunara wood from their own forests in some of their brands now. Perfectionist Japanese people are also doing their best to create splendid whiskies. Yoichi, Taketsuru, Yamazaki are some of the awesome ones.