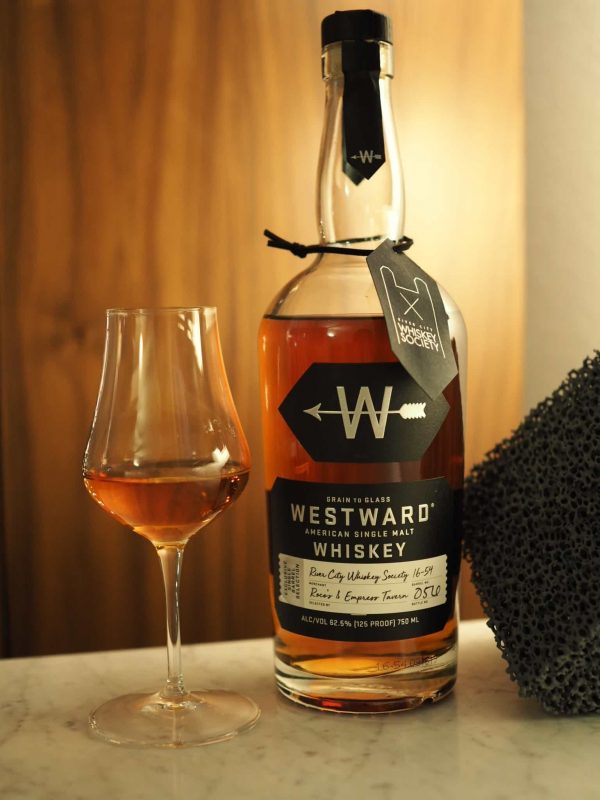 On one of my visits to Sacramento, I was able to get this Westward Single Barrel pick which is a collaboration between River City Whiskey Society,  one of my favorite retail stores Roco Spirits and one of Sacramento's beautiful restaurants, Empress Tavern. The barrel number is 16-54

Westward Distillery was founded in 2004 in Portland. Crafted by the culture and nature of the Northwest, Westward Whiskey is a grain to glass operation and one of the pioneers of American Single Malt. They are using two-row barley in their process. All the production takes place at the Westward Distillery in Oregon. They use double distillation in pot stills which are custom low-reflux stills, resulting in robust flavors in the new make. Maturation happens in American oak and they also work with different styles of barrels for their special releases.

This Westward Single Barrel is at 125 proof, which is quite high. When I first opened this bottle, it was shouting 'Cherries! Cherries!'. It felt like I fell into a pool of cherries, cherry pulp and cranberry sauce. It was red fruits all over. After a few minutes, whiskey started to open up.

Cherries resolve into raisins, caramel, coffee, cocoa and molasses. There are some raw oak notes which I can also describe as 'craft' smell. The palate is chewy and thick as I was expecting. It has cedar, cocoa notes next to strong oak tannins and spices like cinnamon and peppers. Beechwood is emerging at the end with carob and licorice. Leading to a finish with apple pie, cinnamon bark and grapefruit with a hot feeling.

Adding water brings out caramel fudge on the nose and definitely smoothens the texture on the palate while adding some black peppers and chocolate cake aromas.

How Do I Feel?

This is not an easy whiskey at all! The flavors, aromas are all strong. robust and it is all intentional. There is no age statement on the bottle but there is some youth felt very on the nose. However, the oak extraction worked pretty well for this bottle as oak tannins, cedar, baking spices and beechwood created a robust and intense feeling. The finish feels like you just chugged a chocolate liquor and had a spoonful Maraschino cherries.

If you are looking for a delicate, smooth single malt, this is not your gem. This single barrel pick is for those who are looking for a robust character on a winter camp, or those that love their Old Fashioned and wanted it as a single malt. I also believe that there is a good amount of bourbon drinkers who will enjoy this whiskey very much.