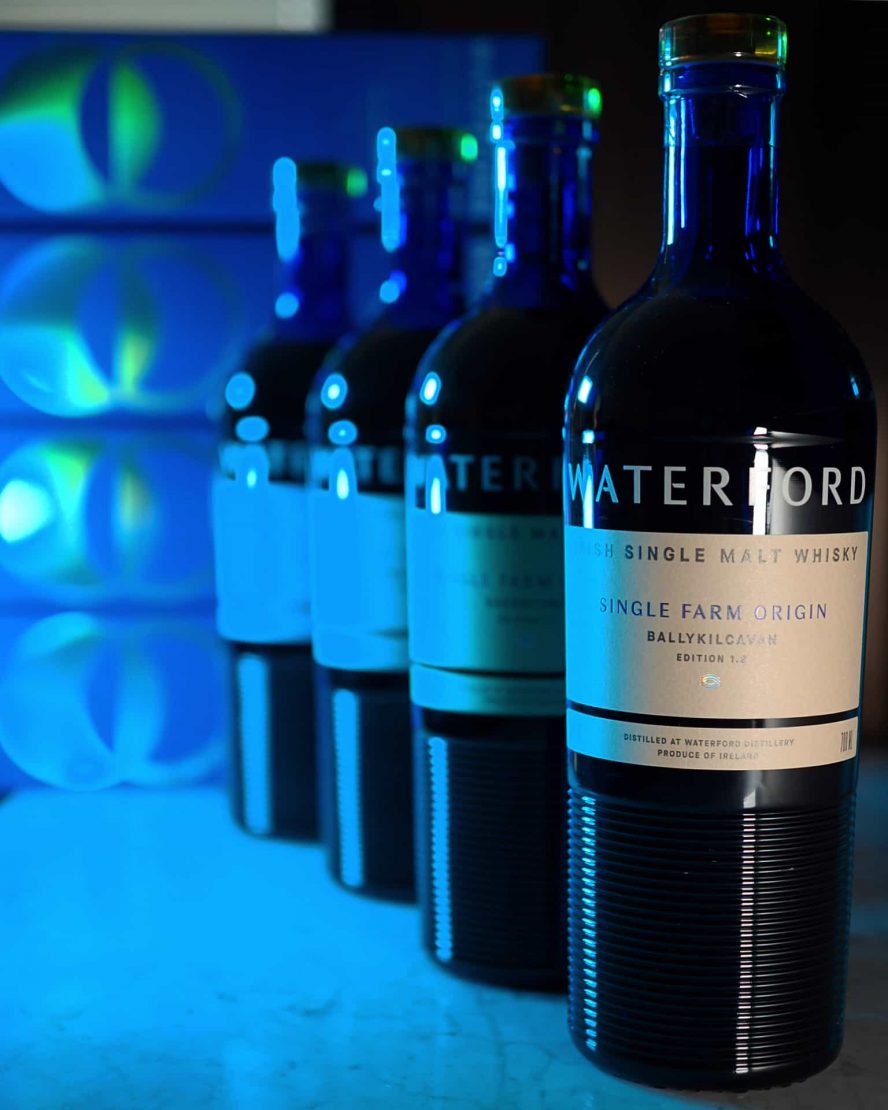 A lot of us were curious about the whisky in those blue bottles for months now. No, I am not talking about the Haig Club. I am talking about Waterford Whisky, the Irish Single Malt Whisky rising from southeast Ireland. Behind the project is not a stranger man, Mark Reynier we all know from the exciting Bruichladdich days. If we are tasting an Octomore Islay Barley, we owe it to him to a great extent.

If you ask people to summarize Waterford Whisky, most will probably say, terroir, provenance. Since they all revolve around barley in this project, I can say Waterford is a ‘barley-centric whisky’. The distillery sourced barley from 97 different farms from Ireland, including organic and biodynamically run ones. These farms, are growing barley on 19 distinct soil types. The first key thing here is the tracking of barley production from each farm! Barley harvested from each farm is tracked from the day it was sowed to the day it is sent to distillation! They are stored in separate silos, which is whole another cost item for the distillery. Mark Reynier states that “We can capture in spirit each farm’s terroir, that subtle character shaped by micro-climate and soil. Individuality and integrity from field to barrel.”

Some call Reynier a terroir obsessed dreamer! He is a true believer of transparency in whisky-making. His path to transparency starts from terroir which gives you traceability, which leads you to transparency. Waterford also brought a Waterford style terroir word into the life, Teireoir!

I also believe that barley matters. After experiencing whiskies, new make spirits with different barley species I was curious about it but during my time with Paul John Indian Single Malt Whisky, which uses 6-row barley grown in India, I could see the impact of barley on whisky more and more. This is actually why I wanted to taste Waterford Whisky at an early stage in its life. I am a trained spirits professional, so I understand how distilling works where we actually deconstruct and reconstruct and sometimes even design what we taste. However, I have never stopped thinking about the origins of the spirit, in this case, barley. It is argued that making wine has less deconstructive stages than spirits but that can also be another debate topic. What I believe is there will possibly be another word that we can agree upon in the future. We are just at the first baby steps of understanding the origin of whisky, barley.

Mark Reynier has a lot more to tell about terroir and whisky. Therefore, I would love to direct you to his thoughts.

As the popular quote says ‘Every whisky was beer at one point of its life”, Waterford Distillery was home to the world famous Guinness Brewery. This plays a big part at Waterford today, as Guinness left their state of art hydromill and mashfilter in the house! Both pieces of equipment are magical for brewing beer, especially to get more flavors. That is how Waterford facilitates them. Unlike traditional mills, the hydromill uses a wet grinding technique as mashing naturally starts. The mashfilter’s duty can be imagined like huge teabags full of mash coming from the hydromill being squeezed. This method is a really efficient way of getting the best out of the wort. The video below will give you a better idea of how they look.

After these crazy gadgets, the addition of old Inverleven stills from Bruichladdich that Reynier was already familiar with, was all needed to make the spirit. During cuts, they are preferring to have a barley forward profile, hence they don’t have set cut times!

When I was comparing whiskies from Waterford, one question I had in mind was the barrel composition for each whisky. As I got deeper in the barrel styles used to make the whisky, I saw the consistency in type and similar compositions.

What about the whiskies?

Bringing four bottles of Waterford Whisky to the US was the main reason I wrote this piece. As I tasted them, I told myself, people should know the reason I am tasting these whiskies, the idea behind the brand!

Mark Reynier’s wine background apparently has some saying on the different whiskies produced at the distillery. You will see ‘Single Farm Origin’ bottles on the internet, which is actually close to a term that we know from the wine industry, single vineyard!

Every Waterford Whisky bottle comes with the Teireoir Code on the box. This code will give you the ultimate transparency about a whisky I have ever seen in my life! Honestly, I am amazed by the level of details found on these pages. It starts from the sowing of barley to soil type, barrel composition, and even sounds from the farm that barley was grown on!!
Visit my reviews below to find those pages!

Let me state a fact! The hype on Waterford was at an unexplainable level. Everybody was speaking but most of them had no idea about the story. Aside from a few good people, no one knew anything in detail. Thus, I wanted to wait until I could taste the whisky without any bias in my head. Then I received my bottles, tasted them one by one, wrote my reviews and started literature research. Even Waterford’s own website is a library to get lost! Probably one of the best among the brands! Take your time and read their ‘Elements’.

I am truly amazed with the level of details that has gone into creating Waterford Whisky. I am more astonished with the ambition of Mark Reynier when he says “We will make the best single malt whisky of the world!” As a professional in the industry, a whisky passionate and romantic, I will be following Waterford’s growth in years with excitement.

Hopefully after the pandemic period, I will have the chance to visit the distillery in Ireland and see everything with naked eyes, experience the transparency in the air!

Until now, I had the chance to review 8 different Waterford Whisky expressions. Here are those reviews