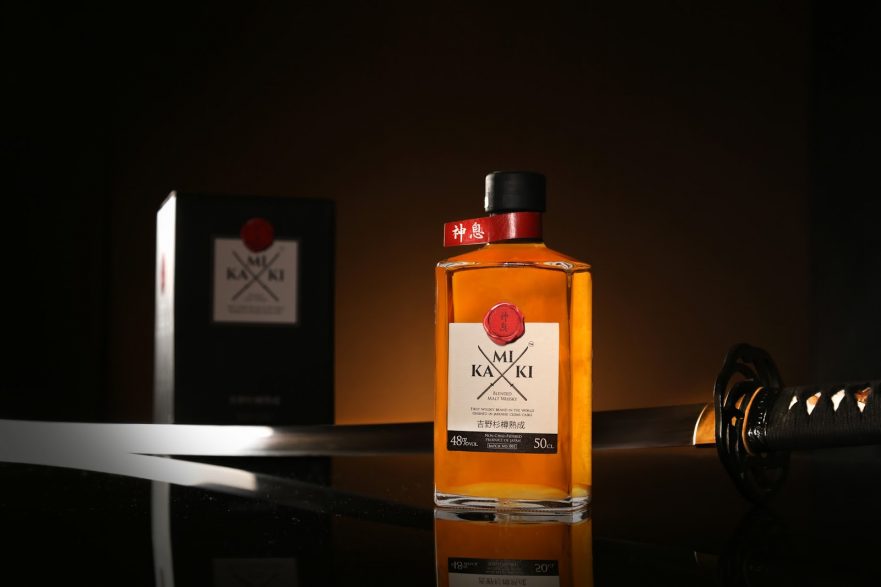 Japanese whiskies are widely sought after, difficult to find, easy and a big pleasure to drink. We all started to appreciate the hard work, history and the art behind it. When art is considered, Japanese whisky bottles and labels, in general packaging is really a joy to discover.

Lately a new Japanese whisky started to show itself on the internet. Kamiki Blended Malt Whisky will soon show up in many countries soon. I will be reviewing what is in the bottle soon, but today I want to tell what is on the bottle.

Packaging of Kamiki was designed by a fellow Turkish friend Erhan ÖZDEN. I have interviewed Erhan on Skype the other day and wanted to learn his journey. WM: Hi Erhan! Can you tell about yourself a little bit?

EO: Hi Koray! I have been working in the advertisement market since 7 years, but working with the lines since I was a child. We used to fill every wall in our neighborhood with my little gang in my childhood. As I started working professionally, I worked as an art director for global advertisement agencies. Local or global, I made various campaigns for well known brands and offered them visual assistance. WM: As a Turkish whisky enthusiast, I am really proud with your work in Kamiki Whisky. How did it start?

EO: The producer in Japan actually had its work done by other designers. Though results were not satisfying since it was hard to distinguish the bottle from the other brands. We realized that most of the brands were using Kanji letters in large fonts and they were trying to showcase their Japanese identity. However it is possible to reveal this identity by various other ways as the Japanese culture is so rich and complex. One of the issues during designing is to enrich the brand with a soul.

Firstly, producer asked me to prepare a draft. We decided on the character of the brand by inspecting the profile of Japanese culture in the foreign perspective. This whisky is not just going to be sold in Japan but also a bunch of other continents. The design I came up with was well appreciated in Japan and the USA, so final decision was to proceed with my design.

WM: I found the details interesting and elegant. Can you please focus into these details?

EO: We did a good research on Japanese culture. One of the elements they highly regard is the sword. Sword of a Samurai is a symbol of his honor, power. So does whisky in most of the time. It has been used as a symbol of power and status in movies for a long time. Thinking about power and Samurai, I have come up with a design carrying a warrior profile. Kamiki resembles the soul of a Samurai living alone. It has a character strong and brave enough to cut its logotype in three pieces.

Bottle form was inspired from Japanese temples. Another detail, which is the wax was inspired from actual whisky producers in Japan, who signs their barrels with red wax. We used the wax as a cross reference to this tradition using minimalist techniques.

WM: You worked with various brands before. How was this work different from the others?

EO: All the work I have done with the other brands until today were 360 degrees campaigns. Unlike these, a packaging design cannot be compared with a regular ad or promotion movie. Packaging has a longer life span than its designer. Thus, it is not just designing a package but also creating a character with a soul. My starting point for this project evolved with thinking how Kamiki would be a person.

Now we see that we are on a right track from the results we get. Kamiki was chosen to be exhibited at thedieline.com and Packaging Of The World where best packaging works take place. Afterwards, it received a Bronze Medal at IWSC in Whisky Packaging category! WM: Can I learn which whiskies you prefer?]

WM: Is there any other whisky packaging designs that you like?

WM: Should we expect any future designs from you for Kamiki or another whisky brand?

EO: Actually, I will start working on a Sake and wine brand identity project. But of course I would love to work for another whisky packaging if I find the chance.

WM: It has been a pleasure to talk to you Erhan. Hope to sip a dram together one day!