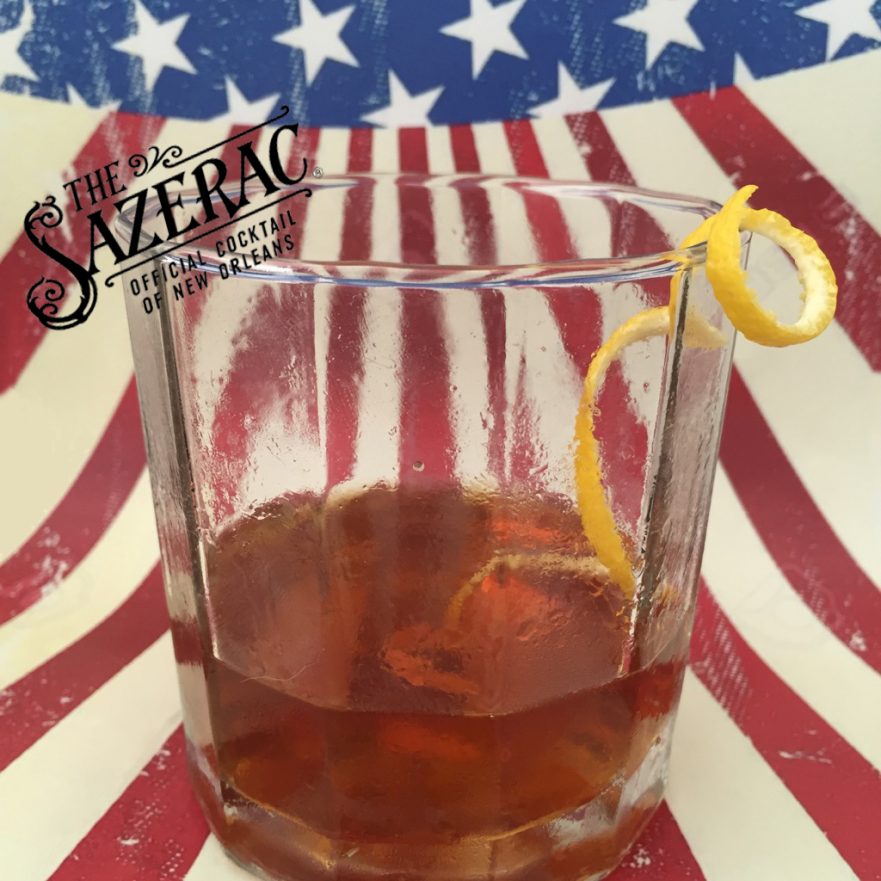 Today is July 4th, the anniversary of the USA announcing its independence from the UK! It is always celebrated with lots of fireworks, outdoors and alcohol. I wanted to crown this day with a special cocktail, which brought the Sazerac to my mind, which known to be the first cocktail in the US!

The story of The Sazerac goes back to 1838! Antoine Amedie Peychaud, a pharmacist working in New Orleans, creates a cocktail at his shop on Exchange Alley, with brandy, absinthe and Peychaud Bitters that was based on a secret family recipe. The cocktail suddenly takes off and bars were among the front runners to try it.

The Merchant Exchange Coffee House, opened by Sewell Taylor and which was located just one block away from Peychaud’s pharmacy, worked in great detail on the cocktail. With the Sazerac-de-Forge et fils Cognac he imported from France, he starts to create incredible versions. Early 1800’s bottles of this Cognac can be found around 12000 British Pounds today!

In 1852, the Manager, Aaron Bird changed the name of the bar to Sazerac Coffee House, showcasing the popularity of the cocktail. In 1869, Thomas H. Handy takes over the bar as he ends up buying it where he started his career as a cashier! In 1871, he meets Peychaud and in two years, he ends up buying Peychaud Bitters’ rights too!

As 1880 arrives, Phylloxera crisis crash the wine and brandy market. Sazerac-de-Forge et fils was also a victim of numerous Cognac brands to announce bankruptcy. But Thomas H. Handy brings the rye whiskey to be used in the Sazerac cocktail and writes his name in the whisky history forever with a very famous rye whiskey bottle with his name on it! After Handy’s death in 1883, C.J. O’Reilly takes control fo the company and creates the Sazerac Rye! Sazerac Rye slowly becomes the most popular rye around.

After Absinthe’s ban in 1912, Herbsaint becomes the replacement and The Sazerac finds its final recipe. Finally, in June 23rd 2008, Senator Edwin R. Murray helps The Sazerac become the Official Cocktail of New Orleans.

I try to use a rye whiskey with a high rye mash bill.

Muddle the sugar in a mixing glass after adding Peychaud Bitters on it. Add the whiskey and fill the mixing glass with big chunks of ice. Stir for 20-30 seconds. Get a chilled tumbler glass or Nick & Nora Glass and add Herbsaint and swirl it around the inner walls of the glass. The aim here is to cover the glass with beautiful aromas from Herbsaint. Strain the cocktail into the glass. Twist the zest and garnish the glass with it. Now, simply serve.

Here is the Sazerac Cocktail I made a few years ago with Twins Cocktail Lab in Turkey. This video on my channel is in Turkish, but it is self-explanatory!