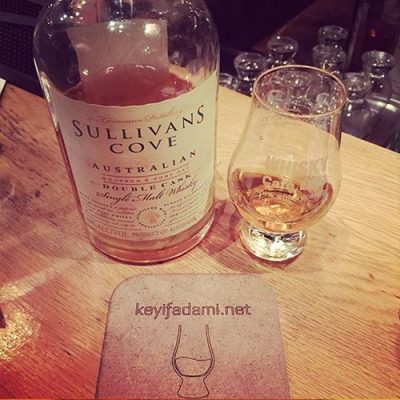 Years ago I believed that Australian whiskies would be the next Japanese in the future. After tasting Sullivans Cove Double Cask and its higher end whiskies in time, my belief got stronger. However, they couldn't use the hype to distribute to the world.

Sullivans Cove Double Cask is Another crazy Aussie from Tasmania. Price is really high and not worth the quality but it is a whisky which makes you feel both oak types clearly ending as a delicate one.

Tasmanian distillery might be the most southern distillery of the world. With Sullivans Cove French Oak they have won "The Best Single Malt" in WWA 2014.

Sullivans Cove uses Tasmanian barley  water from the rainforests and mountains surrounding Hobart. This particular batch I tried was at 40%. In the last years Sullivans Cove, came up with 45% abv too!