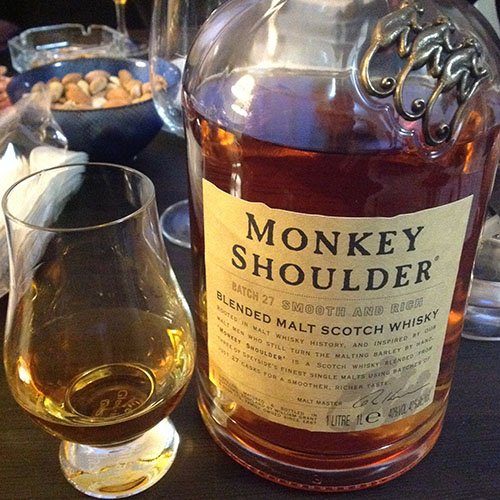 Palate: Creamy, round and full. Nuts and marzipan tastes are existent with butterscotch, nectar and honey.

Monkey Shoulder is a blend of Glenfiddich, Balvenie and Kininvie malt whiskies. We don't know the official(!) ratios but I can give you some gossips about it. If you want to taste highly demanded Kininvie, Monkey Shoulder is a moderately priced and younger alternative. The main malt is rumored to come from the Kininvie.

Monkey Shoulder takes its name from a shoulder dislocation condition of workers that were working at the malting facility of the distilleries. As they were heavily working to shovel and air the barley, repetitive motion was causing them to experience this unfortunate disorder.

I guess that blended malt whiskies are still heavily underrated. Though Monkey Shoulder has proven itself in the market as it became the Most Popular Whisky of 2015. Despite tasting really decent, it is also a fantastic base for cocktails. Especially for sour cocktails and cocktails with ripe fruit base.