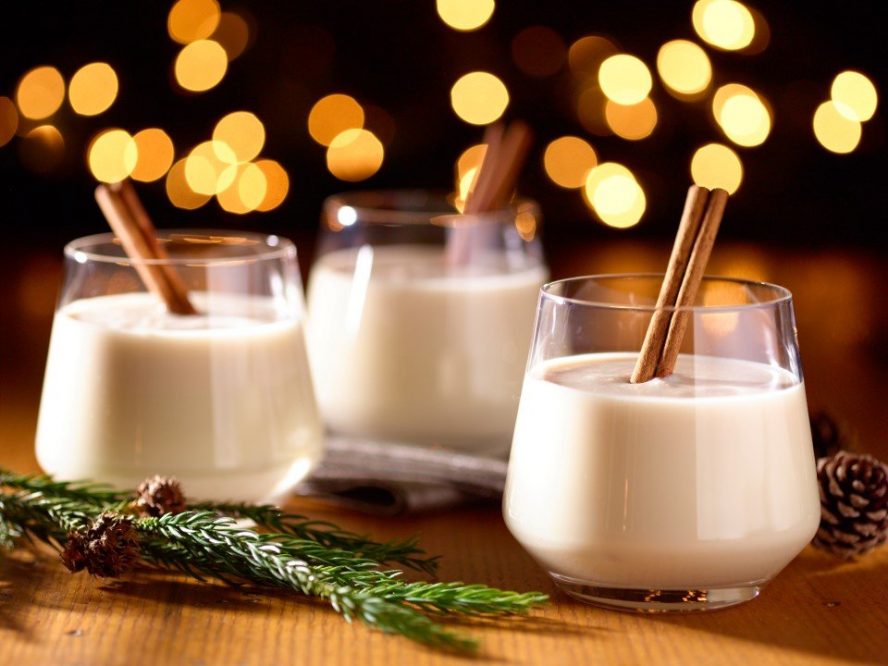 As Holiday season approaches, a creamy, cozy and also boozy drink starts to appear in social media feeds, at the supermarkets on liquor store newsletters. As you already guessed, this creamy, off-white drink is eggnog! I wanted to get a little bit deep understanding of it and I might had some(!) cups of it in the way, and now I am sharing this great cocktail which has books written just for itself!

There is a vast amount of information on the internet about eggnog, but there is no certain information of its origin. One idea is that, since ‘nog’ means carved wooden mug to serve alcohol in old English, the drink should originate from Britain. Nog also meant ‘strong beer from East Anglia’, which supports this idea. The word eggnog was introduced in the US in 1775 according to Online Etymology Dictionary

It is pretty much commonly agreed that eggnog is a variation of a hot British alcoholic beverage called ‘posset’ which is a mixture of hot milk, wine or ale and spiced with nutmeg and cinnamon. Posset was a popular drink to cure the common cold, sleeping problems and some minor illnesses too. Posset is made as a dessert now but it gave us the eggnog!

In England, eggnog was the drink of aristocracy as milk, eggs, Sherry and Madeira could only be afforded by the wealthy. The farms were owned by big estates. Also, keep in mind that milk and eggs needed refrigeration. British aristocracy generally mixed milk with eggs, brandy, madeira or Sherry, sometimes adding cream and ice.

Like Whiskey Sour or The Sazerac, Eggnog also had numerous changes on the base drink in different countries when it crossed the Atlantic. The Triangular Trade and the high taxation of brandy and Sherry across the Atlantic made rum a popular ingredient for the cocktail. After the American Revolutionary War, the supply of rum decreased and bourbon got into the recipe. It is said that George Washington has a stronger recipe using rum, brandy, Sherry and bourbon! It is perfectly usual for drinks to have varieties like this. For example, in Peru, there is one version of eggnog using Pisco. My opinion is to trust your palate and make it with whatever alcohol you want.

In 1826, the famous Eggnog Riot happened in the USA! After the war in 1812, the command changed at West Point and the school got incredibly reputable after this change. One of the pioneers of this change was Colonel Sylvanus Thayer who was known to have a great deal of discipline. Possession of alcoholic beverages in campus was strictly prohibited. In December 1826, cadets were told that their Christmas eggnog was going to be alcohol-free, due to regulations. This announcement made cadets to smuggle liquor into the academy. Cadets smuggled around 4 gallons of whiskey 2 days before the party into the campus and eventually became drunk and created disturbance throughout the campus. This incident got 20 cadets and a soldier to be court-martialed. Many of them were expelled. This riot resulted in the redesign of West Point’s buildings in time. You can find a detailed version of the Eggnog Riot in this article.

Enough history? Let’s get into the recipe. This is a version I like to make. Great news is you can play with it as you go and change or add whatever you like.

Separate the egg white and the yolk. Add sugar to egg yolk and beat it with a mixer until you achieve a steady color and texture. Add this mixture, milk and cream into a big bowl and mix it with nutmeg and vanilla seeds until it becomes homogeneous.

Now is the time to add the alcohol! I generally prefer brandy, but there were times I mixed brandy and bourbon resulting in delicious eggnog. I would suggest keeping the booze to a minimum of 0.5 liters. I leave it to you to add more.

Get back to the egg white and mix and beat it until it becomes frothy. Add it to the mixture in the bowl and slowly mix the froth into it. Add some more grated nutmeg to it and place it in the fridge! I will encourage you to rest the cocktail in the fridge for a few hours before serving for uniform chilling and a heavier texture.