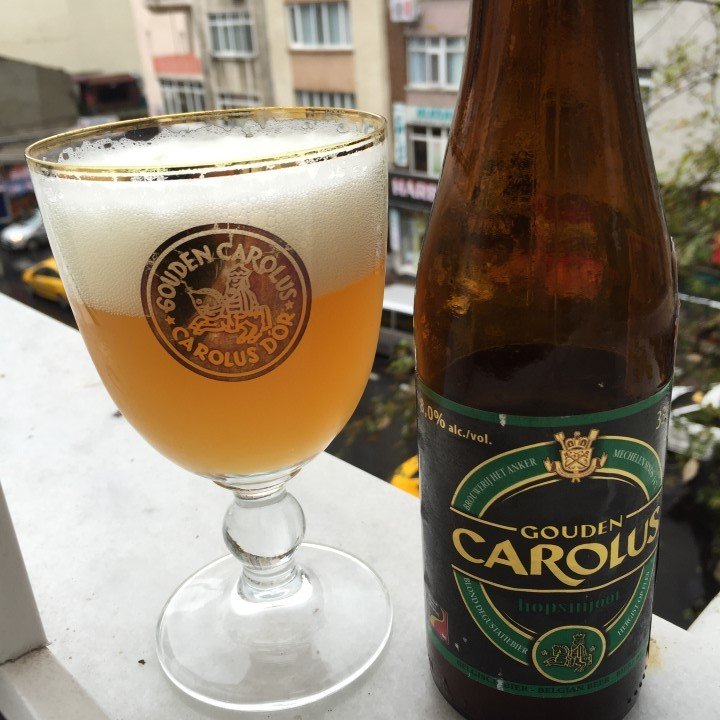 Colour: Fuzzy bright yellow.
Nose: Malty and grainy aromas go in front together. After aeration banana, grass, hoppy and yeasy aromas find their space. Pine and peppery aromas are delivered as it is heated up.
Palate: Medium to full body with a creamy texture. Hops, candy sugar, yeasy, grapefruit are dominant tastes. Honey and malt are also existent.
Finish: Medium to long finish. I can absolutely say that it is refreshing. It has a beautiful bitter finish, though it could be more when you know that it has 5 different hops.

5 different hops are fractioned and used in cooking of this beer of Gouden Carolus. This property can lead this beer to be recognised as an IPA. Production phase is designed to bring a richer flavor profile. This beer is called to be the best beer of Zythos Beer Festival 2008 where it was first announced.

Above I told that it has a rich and layered nosing profile. On palate it has lighter profile than I have expected and the bitter finish was surprising which makes it refreshing. This bitterness is told to be (IBU) 50 according to the producer.

As it is bottle conditioned second fermentation takes place in the bottle. The shelf life is 2 years. According to me it is one o the best Belgians in Turkey. I can totally recommend it. Remind that Gouden Carolus has started whisky production too and there are rumours that this may bring out some exciting trials in the future.

what an awesome beer !!