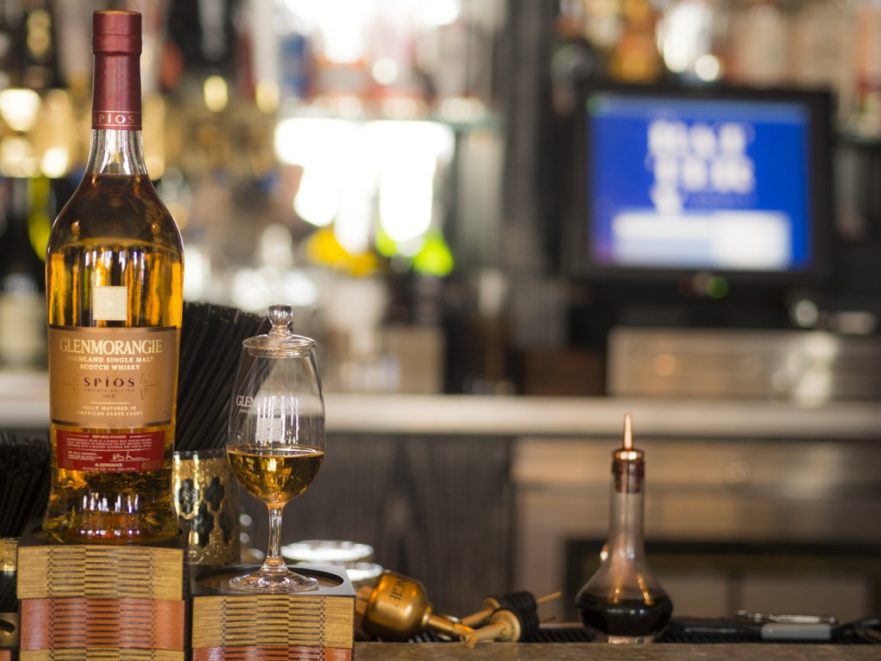 Nose: You can feel the nature of rye whiskey with its tannic character releasing itself as clove and vegetal notes. Toffee is definitely there in a refined way dissolving into cherries and allspice.
Palate: Palate has a nice body, thicker than I imagined. Spices coming from the rye casks defines the way flavors evolve. Nutmeg, cinnamon meets fairly subtle vanilla and caramel puding with earthy notes.
Finish: Sweetness peaks with decanting at the beginning of finish. A rush of orange peel adds richness to sweetness with a cigar like finish.

Glenmorangie Spios is the new exciting member of Glenmorangie's Private Edition Series. It is the 9th release and another interesting whisky from the Highland's star.

Spios is the first Glenmorangie ever to be fully matured in American ex-Rye casks. "It was inspired by the bygone glamour of America's golden whisky era, when American rye whisky was feted in the country's most prestigious saloons." says the distillery.

I loved the way rye barrel profile was introduced during the nose and I loved the progress in the glass. Natural decanting in the glass gives it a smooth drinking profile with subtle spices. Adding a couple drops (please no more than that) introduces perfume like notes and brings the sweet tones forward. I wasn't a big fan of diluted version since 46% with the spicy character was just enough for me.

In my opinion this expression is also another gateway whisky to American palate as two other well known Speyside distilleries, Glenfiddich and The Macallan did with their 14 year old Bourbon Barrel Reserve and 12 year old Double Cask respectively.

If we get into the casks, Dr. Bill Lumsden told that the rye casks are at least 6 years old and soaked in rye whiskey which had 95% rye in the mash bill. For all those American whiskey lovers out there, this gives a tip about the source of the casks but there is no official word about it.

After Bacalta, the 8th release, this was a different move and personally I liked the way the Private Edition Series is evolving!