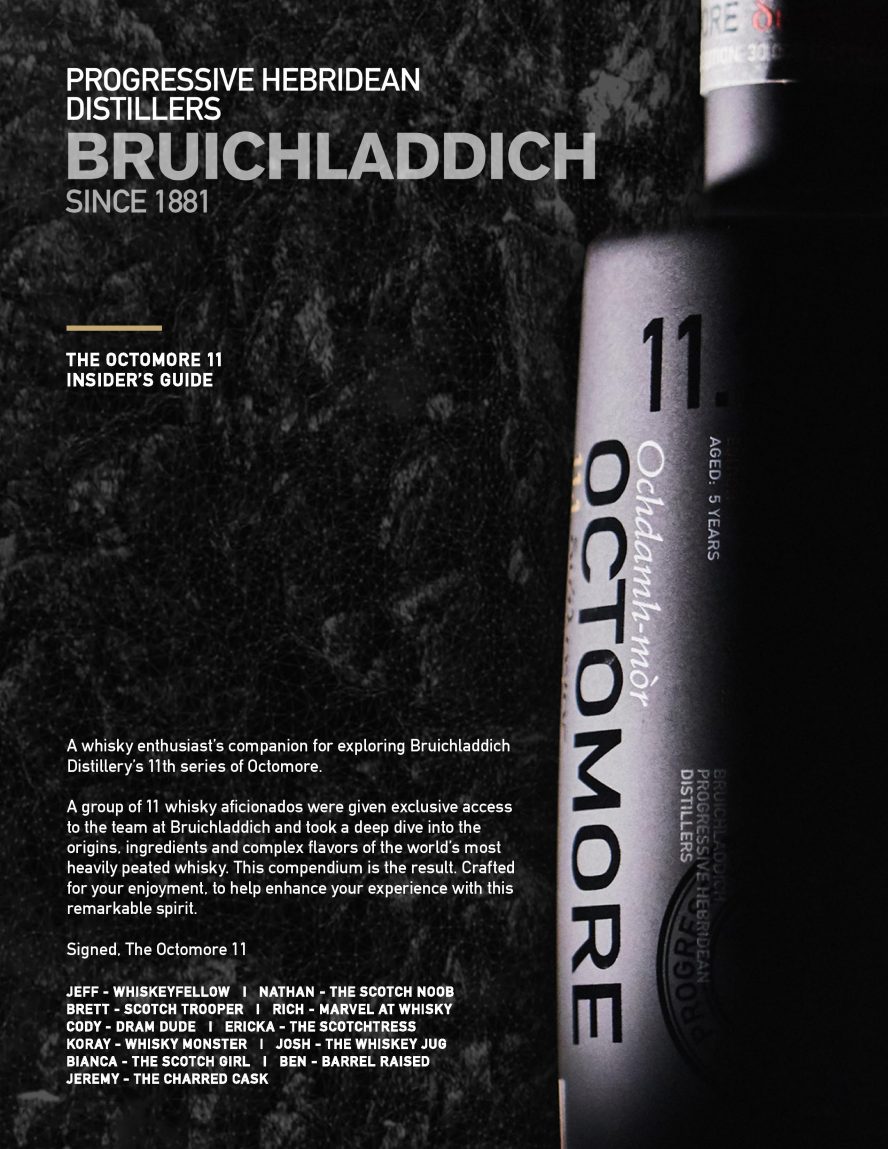 The Octomore started from a ‘What if ?’ clause and turned into being an excitement for all peat lovers in the whisky universe. Octomore is known to have much higher peat levels that no other distillery had tried before and became a benchmark when ‘heavily peated’ phrase is used. Every fall, a new release of Octomore is announced and this year 11 whisky aficionados were selected by Briuichladdich to create a guide to enjoy the 11th edition of the Octomore to the best. We called it ‘The Octomore 11 Insider’s Guide’. Here I present The Octomore 11.

Part 3 of The Octomore 11 Insider’s Guide,
“The Numbering System and History of the Releases,” is released on The Whiskey Jug!

The following post is written by two dear members of this team. I am incredibly happy to host their article.

Ericka Ginger is a whisky lover and dram curator in northern California.   Known as The Scotchtress on Instagram, she is a former event planner and known for hosting whisky events and whisky themed parties.  Not a brand ambassador or whisky tech –  just a fun whisky drinker!  Welcome to the less serious side of whisky drinking!

Cody is a whisky enthusiast based in the Bay Area, California more commonly known on Instagram and in the whisky world as Dram Dude.  What started as simply enjoying whisky on occasion turned into an extended journey into the pursuit of whisky knowledge and the perfect dram. This led him to share his passion and growing whisky collection with the world and other whisky enthusiasts through his Instagram page, @dram_dude.

The primary focus on what makes Octomore unique has always been the level of peat. It is peated to ridiculously high levels, higher than any other distillery has ever done.  But for Bruichladdich, it’s a lot more than that. Their main goal is to still create a high-quality spirit with that heavily peated malt, even if it means making cuts during the distillation process that might not retain the highest level of peat in the spirit.  This level of thinking and dedication to quality over quantity has resulted in some of the most amazing, powerful, complex and even elegant whiskies ever created regardless of peat levels, age and ABV.

Each whisky in the Octomore series is super heavily peated in batches, making each one unique.  There is no target level of peat other than it must be over 80 ppm.  They are all distilled the same way with the main differences being barley type and cask influence.  Finally, they are bottled at the distillery on Islay at cask strength with just a small splash of spring water from Octomore farm.  Octomore is a rule breaking whisky, unapologetic and incomparable.

So how does something that is too peated, too young and too strong work?  I don’t know, and you probably shouldn’t question it because it just does.  It just goes to show that two wrongs (or three) sometimes do make a right.

I have a secret love affair with black bottles.  If I’m being completely honest, it was the thing I noticed first.  I was just finding my way with scotch, and I was always trying to keep mental notes about the details – regions, distilleries, age, color.  There I sat, in a bar I can’t remember, looking up at a wall of bottles I didn’t know, when I locked eyes on it.  “What is that?” I asked the bartender.  He walked over, picked it up, opened the bottle, and suddenly I’m face to face with the unknown.  He poured a dram, and my senses were overwhelmed.  “What is this??” I ask again.  He hands the glass over to me and says one word: “Octomore”.

The good people over at Bruichladdich want you to believe that there’s no magic going on there.  They recently became a Certified B Corporation, which means they’ve met the highest verified standards socially and environmentally, and they pride themselves on the transparency of their products and how they make them.  When you talk to employees, they happily spill their guts on all of the details, holding no details close to their chest.

While I can’t claim to be a master distiller, I do know that there isn’t much magic to how whisky is made.  Barley is steeped in water, spread out to germinate, and during the process starch converts into sugar.  The germinated barley goes to the kiln to dry, and in Octomore’s case, peat is used to impart that amazing flavor.  The dried malt is ground into a coarse flour, or grist, which is mixed with hot water in a mash tun to form a sticky-sweet beer of sorts called wort.  The wort is cooled and then pumped into washbacks where yeast is added and fermentation begins.  The yeast chows down on the sugars, producing alcohol, carbon dioxide, and a dramatic frothy head.  After a couple days the drama dies down, and the liquid moves to the pot stills where it is distilled (I’m simplifying), and put into oak barrels for maturation.

When you speak with Bruichladdich’s Master Distiller, Adam Hannett, he tells you that there’s nothing magical about Octomore 11.1, and that he’s simply “lead by liquid”.  The .1’s are always 100% Scottish mainland barley, matured in American oak.  This latest release spent a short five years in Jim Beam, Heaven Hill,  and Jack Daniels ex-bourbon casks.  Distilled in 2014, only 30,000 bottles were produced, with a wonderfully strong 59.4% abv, and malted to 139.6 ppm.  For me, this was the biggest surprise of the new Octomore line up.  I was expecting it to be similar to older .1’s I’ve had: smoky, medicinal, with strong peat and barbequed meat influences.  This release was none of those things.  I’m not even sure I’d have guessed Octomore in a blind tasting.  This dram is soft and buttery, like a crisp cookie, with a very light peat influence.  The nose is honestly understated, elegant, and opens up into creamy butterscotch, light citrus, vanilla, and even powdered sugar.  The palate does maintain some traditional Octomore flavors.  There is no iodine here, but instead a nice blend of earth and oak, very light smoke and sweet peat, ending in an exceptionally long earthy finish.  For me, this is the most sophisticated and refined of the .1’s I’ve tried.  If you’ve ever worried about jumping into an Octomore before, this may be the one for you – a truly approachable dram.  How can this possibly be 139.6 ppm and 59.4%?

In contrast, the .2’s are really the wild cards.  The 11.2 is also 5 years old and 100% Scottish barley, but this year’s release was partially aged in French Pauillac wine casks, and partially in ex-American whisky barrels, before being finishing for 18 months in French Julien wine casks.  Distilled in 2014, its 8,000 bottles are arriving at 58.6% abv and 139.6 ppm.  These unique bottles are normally travel retail exclusives, which makes them more difficult to find in the States, but so worth it when you do.  I have a love affair with the 10.2, not only because I love almost every scotch I’ve ever had finished or matured in French Sauternes casks, but because this silky dram is an elegant marriage of barbecue, tropical, and stone fruit.  The traditional Octomore maritime and oily notes that fans have come to know and love are, happily, still present.

The Octomore 11.3 is a truly unique whisky, especially when compared to its counterparts.  What makes this whisky so special is the barley.  100% of the barley comes from Irene’s field from Octomore farm, just a few miles away from the distillery, making this a completely Islay made whisky.  In essence, it is the Octomore of Octomores. Many of us are aware of the impact the climate on Islay can have on an aging cask of whisky, and for Octomore 11.3, Bruichladdich is doubling down on that by imparting that distinct Islay character even before it is aged. The Concerto barley was harvested in 2013 by farmer and longtime friend of the distillery, James Brown, malted to 194 ppm and then distilled in 2014.

If you have a hard time believing if terroir really has an impact on whisky, then you simply need to taste the Octomore 11.3.  Like the 11.1, it is matured on Islay for five years in first fill American whiskey casks, making this year’s Islay Barley release the perfect example of showcasing why terroir matters.  I have been fortunate enough to try a few of the previous releases of the Islay Barley editions, and they are always some of my favorites.  The whisky consistently has a rich, malty character that really shines through.  Bottled at 61.7% alc./vol, the Octomore 11.3 is the one to go for to taste the true spirit of Islay.

What happens when you age a typical 5-year Octomore for an additional 5 years?  Enter Octomore 10-year old.  To be honest, this was my first taste of an Octomore 10-year but considering it has only ever been released 3 times before, I suppose it’s not that uncommon.  While 10 years old is not all that old for single malt scotch, it is old for Octomore.  Those extra years add a layer of maturity, subtlety and tranquility, taming the beast that is Octomore.  But don’t let that fool you. This is still an Octomore.  Malted to 208 ppm, higher than any of the other Octomore 11’s, and bottled at 54.3% alc./vol, this is still a powerful whisky regardless of the age.

Like the Octomore 11.2, Adam Hannett wanted the 10-year old to be about the cask influence while the 11.1 and 11.3 are focused on the barley. Matured in a combination of first and second fill American whiskey casks & Virgin Oak casks, those extra years make a considerable difference.  The casks take a step forward, and the barley plays a supporting role.  While the younger releases are great in their own way, the 10-year old brings a level of richness and depth not present in the younger Octomores. It is a truly beautiful and elegant whisky.

And After All That

Maybe you’ve already experienced Octomore. Maybe you’re one of “those people” who anxiously await each new release, and buys them up as soon as you find them.  Maybe this year will be the year you finally go for it!  Maybe you’ll be sitting at some random bar, looking at the standard bottles, and you’ll see it.  This is your game-changing moment.  Here you are, face to face with the worlds most talked about, unusual, elegant, and attention-grabbing scotch of all time.  “Octomore 11.1”, the bartender says, as he shows you the bottle, knowing you’ll never forget it.  You take a sip, totally aware this is just barley, yeast, and water, but what you taste is light peat, honey, citrus, butterscotch, and honeysuckle. Earthy. Floral.  A lovely balance of peat and oak, that changes everything you think you know about whisky.

And there it is: Magic.

Part 5 of The Octomore 11 Insider’s Guide,
“The 8-Minute Tasting,” will release tomorrow on WhiskyMonster.com
Check back here for the link!