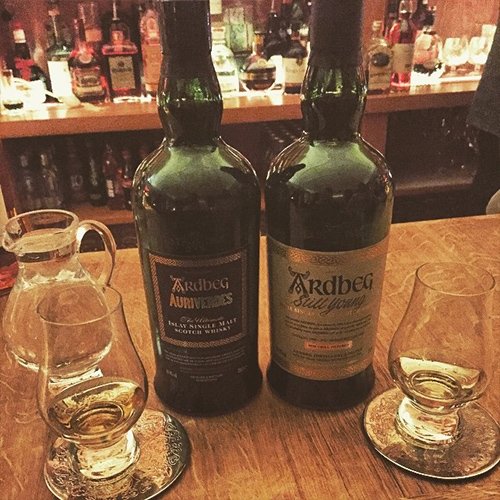 Nose: Peat, vanilla, oak, pomegranate, coffee and chocolate is flying at the mouth of glass.
Palate: Palate is round but not balanced. Floral notes explodes like in a gin. Phenol is dominant to the end ending with earthy tones and tobacco.
Finish: Mocha, peat, vanilla and lemon peel notes in a medium long finish.

Ardbeg Auriverdes was released on Ardbeg Day 2014. It was dedicated to World Cup 2014 which took place in Brazil. Name takes its roots from Auri(Gold) and Verdes(Green) resembling the World Cup and national team of Brazil.

Dominance of peat is a very popular opinion with this expression. Don't get me wrong, this is not just peat. It is peat and darker aromas like tobacco, chocolate, cinnamon bark with bitterness which are bezeled with floral flavors. It opens up to a finish of signature Ardbeg flavors like mocha, citrus with a medium long finish.